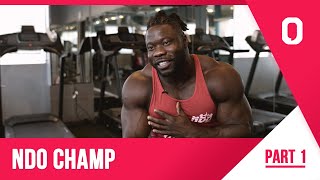 NDO Champ on escaping from a warzone in Liberia to the streets of Brooklyn, New York. (part 1) 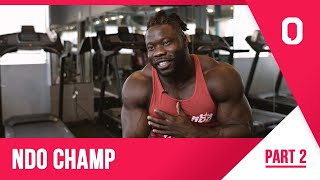 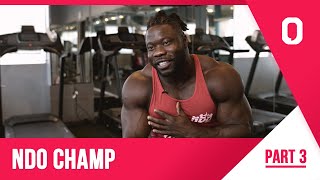 NDO Champ on seeing he will be Mr. Olympia & having a second chance after prison. (part 3) 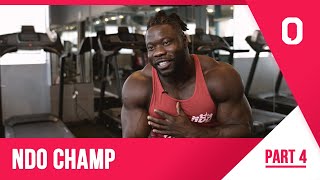 NDO Champ on doing boxing classes, being introduced to bodybuilding & being shot. (part 4) 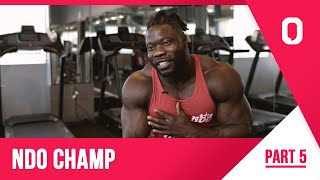 NDO Champ on getting shot and going on stage three weeks later. (part 5)

Robert Wilmote, aka NDO Champ, is a child of the Liberian civil war. The Liberian Civil War is a historical event that has shaped the lives of him and his family. Thousands of Liberians lost their lives and were displaced from their homes. Fortunately, his Grandfather was able to accumulate the funds so that his mother and his siblings could migrate to America and escape the dangers of the war. As a seventeen-year-old kid, Robert had trouble adjusting to American Culture. Every morning, he woke up at five a.m. and headed straight to the gym to get out of his frustrations. He exercised for fourteen hours out of the day. Although the strenuous exercise left body sore, his mind was left stronger than ever.

The routines he performed provided him with the discipline and strength he needed to carry out his life goals. However, there was a time in life when he was lost, did not know his purpose in life, and lacked passion. Robert is living proof that one can rise from oppression and change their life for the better. In school, he started to rebel, and he followed the wrong crowd, which got him into trouble. He strongly believes that the people who you surround yourself with influence your behavior. "You are the company you keep," is an expression proven to be true. All his negative actions led up to Robert serving a little time in Federal Prison.

While incarcerated, he then discovered his identity and passion, two things that he was not able to accomplish while being home distracted by bad influences. In prison, he discovered his true passion and life purpose, which was fitness. It helped him both physically and mentally. Then he studied at a literary center to read about the importance of nutrition. He began to feel like his purpose in life was to utilize his passion to help change the lives of others for the better. He believes that knowledge is the key to empowerment and decided to become a motivational speaker to inspire troubled teens and to excel and rise above negative influences. Upon his release of being incarcerated, he then began to accomplish all the goals he set for himself while being imprisoned.

How did Robert get his name NDO Champ which NDO stands for No Days Off. "NDO Champ" was earned but given by the youth of New Jersey. He became a personal trainer, cross-fitness instructor, and competitive bodybuilder. He also began to accomplish the ultimate goal, which is to help others. He also trained high school basketball students and gave them motivational speeches about the importance of being both physically and mentally strong. He volunteered at the local community centers to teach members of his community self-defense skills and advised local teens to become great. As of today, he continues to volunteer in his community and does whatever he can to make a difference.

Robert's grind exceeded his expectations, so he began to reach far beyond what he could ever imagine by creating his own brand called NDO Nation, LLC. It is composed of a group of hardworking and dedicated individuals who aim to help change the lives of others through training and motivational speech. Using all social media channels, NDO Nation influences many followers around the world that are inspired by his work. He someday hopes to influence even more people around the world. Although he has reached some level of success, his next step is to create an NDO Nation fitness facility so that he and the NDO Nation team can reach a bigger audience hands-on. They aspire to be the leaders and role models that they wish they had growing up in the harsh environment of the inner city. NDO Nation can lead and be the change they want to see in their communities, and it starts with them.

It's about Motivating the youth every day, changing their life through health and fitness. The mission for the next 5 years is to be the number 1 motivator in the industry and the number one 4x Mister Olympia, best actor, and best celebrity trainer. Robert was also featured in a Jeep Chrysler TV commercial. "If you don't feel good, you can't do good. Your health is the most important thing. You can have all the money in the world with bad health, your nothing. It's a great feeling to be a part of changing lives"- NDO Champ. Robert's passion for acting is to put everything that he went through on camera so people can relate. NDO is currently working on a Bench-It-Up Tour going from state to state, motivating and inspiring the youth and adults to put the guns down and lift weights.