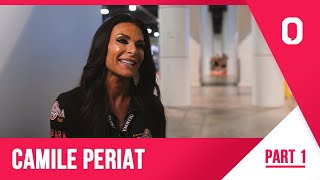 Camile Periat on how she started in the fitness industry & managing her busy life. (part 1) 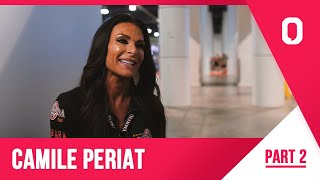 Camile Periat on her goals, her businesses, advice & her daughter. (part 2)

Camile Periat was born in 1979 in California, USA. She grew up in the countryside and loved to play sports as a child.

Some of Camile’s favorite sports were volleyball, basketball, and softball. After joining Cabrillo College to study Dental Hygiene, Camile became a part of the Sea Hawks swimming team.

After her college days came to an end, so did Camile’s time as a competitor within her swimming team. But her passion for competing stayed.

Deciding to try something new, Camile went on to become a fitness contestant. After her first show, Camile said: “I loved it!” Just 2 shows later, she was standing on the bikini stage with an IFBB Pro Card in her hands.

She quickly made her name in the IFBB Pro Circuit, winning shows such as the 2016 Dayana Cadeau Classic, and placing 7th at Mr. Olympia.

Camile’s lightning rise to the top saw her get invited to the 2018 Arnold Classic where she placed in a respectable 7th place.

Becoming a Fitness Coach and Entrepreneur Alongside her success on the stage, Camile has also made strides as a fitness coach, helping a number of people achieve their ideal physiques.

In 2016, Camile expanded her career even further to become an entrepreneur – opening her first sports company. She also opened her own gym in 2018, in Santa Cruz, California.

Camile’s passion for fitness and bodybuilding remains as strong as ever. She continues to post awesome pictures on the internet, along with helping her clients and fans achieve their greatest physiques.

“I have embraced the sport of bodybuilding and love both training and competing. I also coach local and online competitors in the NPC bikini division and love it.”