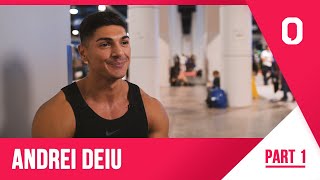 Andrei Deiu on being from Romania, competing & handling fame. (part 1) 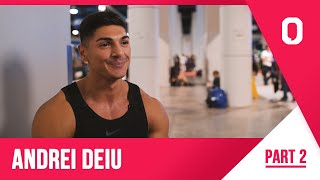 Andrei Deiu on what brought him into the sport, why he moved to the U.K. & his goals. (part 2)

Andrei Deiu hasn’t always been the active, and healthy person he’s been known as. In his younger years, he used to play a lot of video games, and eat of junk food. At the time, Andrei didn’t think too much about the possible health implications this lifestyle might have had for his future.

Andrei realized he had to do something about the bullying and his weight, this, as Andrei recalls, “that’s how I got started.”

Starting his journey into fitness, he wasn’t sure of the outcome, Andrei said; “In the beginning, I wasn’t very confident about the outcome of my journey, and everything seemed impossible to me.” With no idea about nutrition or training, he went at it alone.

In 2011, Andrei entered his first competition and flew over to Miami where he presented an awesome physique for a 17-year-old. He now continues to train and improve on his weaker areas to hopefully come back year after year making the top spot as a Pro Bodybuilding Competitor.

Andrei has now become a successful fitness model and can be seen on numerous advertisements for clothing brands and fitness apparel. His awesome physique has taken him from couch potato playing video games all day long, to becoming one of the best in his class. It’s clear to see Andrei’s hard work paid off.